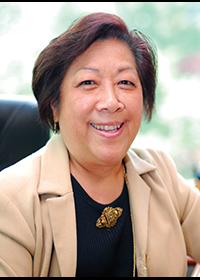 Her work on leadership, diversity and women's issues has led to a number of invitational talks and publications in these areas. During the past year, she was invited to the Oxford Roundtable to talk on women and leadership, and was designated as a Fulbright Specialist in this area. She has authored a chapter on women and leadership for the Oxford Handbook of Leadership and Organizations and the prologue for Women of Color in Higher Education. As president, Society for the Psychological Study of Ethnic Minority Issues (Div. 45, APA), her presidential initiative was examining leadership styles and identity of women and diverse leaders.

Academically, she has trained psychologists and health care professionals in the diagnosis and treatment of emotional problems in community health care delivery systems; and she has played a major role in the development of culturally competent training curricula and service delivery models for diverse populations. She has published extensively including 15 books, 21 book chapters, 27 articles, and over 200 professional presentations in the areas of diversity and cultural competence, leadership, clinical training, Asian-American and women's issues, health, and mental health. Her most recent books are: "Diversity in Mind and in Action" (2009), "The Psychology of Prejudice and Discrimination" (2009), "Women and Leadership: Transforming Visions and Diverse Voices" (2007) and she edited an American Psychologist special issue on Diversity and Leadership (2010). Her book on Diversity and Leadership by Sage is due to be released Sept. 9, 2014.

She has served in many leadership positions on national, state and local boards which currently include: Advisory Committee on Eliminating Mental Health Disparities Committee for Substance Abuse Mental Health Services Administration, U.S. Department of Health and Human Services; president, National Council of Schools and Programs of Professional Psychology; advisory board of ERASE Racism; board chair and member of Nassau County Mental Health Association; president, Division of Women's Issues, New York State Psychological Association; board Chair of Organization of Chinese Americans-Long Island. In these roles, she has promoted coalition building and grassroots advocacy to impact national policy on mental health and substance abuse issues, and access to care for underserved, low income Asian American communities. She helped to spearhead the change in federal guidelines to include Asian-Americans as an underrepresented minority group, influencing the training of clinical psychologists.

Chin was the first Asian-American psychologist to be licensed in Massachusetts, and has been the first female in a number of her leadership roles. She has received many awards for her leadership and her work including: Outstanding Executive Director Award in 1991 from the Massachusetts League of Community Health Centers, where she promoted the integration of primary health care and behavioral health. She received the Women Who Care Award from Women in Philanthropy in 1991 for her extensive advocacy and community work promoting access to care, particularly for Asian immigrants and refugees. She received the Distinguished Contribution Award from the Asian American Psychological Association in 2001. She is the recipient of the Nassau County Executive's 2009 Women of Distinction Award. She was honored as an Elder at the 2013 National Multicultural Conference and Summit, receiving two presidential citations on her work in women and diversity issues. She received the 2013 NYSPA Diversity Award and the 2013 Margaret Floyd Washburn Award.

She has also worked within the American Psychological Association to promote attention to clinical practice and ethnic minority issues through Divs. 12, 29, 35 and 45, and within APA governance on the Committee on Ethnic Minority Affairs, the Committee on Professional Practice and Standards, and the Board for the Advancement of Psychology in the Public Interest. As president of Div. 12, Section VI, she facilitated renewal of the section emphasizing clinical training and diversity issues, and developed its first newsletter in 1992 which still remains a key communication tool for the section. Within Div. 35, she promoted the involvement of Asian American women psychologists as chair, Task Force for Asian Women and became its first Asian-American president in 2002. Her presidential initiative on feminist leadership mobilized dialogue and scholarship in this area.